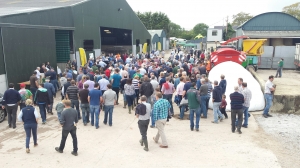 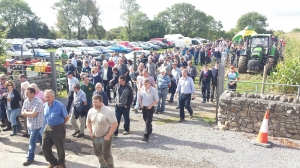 There was huge interest at the SHINES AGRI /SAMCO “ Maize Open Day” in Adare on Tuesday 30th.

The sun shone brightly as the crowd of 250 farmers gathered at the Samco Trial site in Adare to hear Gordon Shine speak on “The benefits of Growing Maize”.

Andy Stainthorpe Business Manager with Pioneer Seeds advised on the different maize seed hybrids most suitable for use in Ireland.

A demonstration of maize trial harvesting, the Samco Field Lift and the Samco Bag Press followed and kept the interested audience intrigued.

Gordon Shine explained that the “Samco Bagpress” provides a complete solution to on farm storage of maize, without having to build an expensive specialised unit. The Samco Bagpress has now evolved into the Samco Bagpress and Crimper, this system allows storage of grain in a fermented state with higher moisture at a reasonable cost.

Gordon also explained the important of good ground preparation and soil fertility which can be best advised through the “SHINES AGRI”support network. He further explained the success of “SHINES AGRI “to date has been based on its policy of “Advice and Support directly to the Farmer”.

Coming from my own background of being involved with Samco and of Dairy Farming, he explained I realised the need for support and guidance required by dairy farmers to grow a successful and consistent maize crop, so with the combination of growing interest and positive trial results and a lot of “talking” we have found ourselves on the forefront of this positive maize growing trend.

We have the knowledge and know-how of being in a position to advise farmers on how to grow this consistently high energy, high yielding home grown crop and to in turn increase their profitability. He also stressed “It is paramount that farmers be advised and encouraged to growing this crop particularly in the more marginal areas as Milk quota’s open up”

Adare Farm Foods provided a sumptuous “Pig on the Spit” as the attendee’s listened to Guest Speaker Dr. Bridget Lynch who gave a great insight into the advantages of feeding maize following extremely positive trial results at UCD and other

trial sites around the country over the past number of years.

Next to speak was Samuel Shine MD of Samco who has pioneered the growth of Maize in this Country, he explained that the Samco System which has three machines integrated into one sows the seed, sprays the ground with a pre-emergence herbicide and covers the embedded seed with a specialised degradable film. This specially designed film is proven to increase soil temperature which ensures rapid plant growth throughout the season and also protects the young plant from early frost. The Samco System is now a synonymous Irish brand which has taken the world by storm providing an opportunity to produce a higher energy, higher yielding home grown animal feed and energy efficient crop in regions where it was previously very difficult and in some cases next to impossible.

Gordon stated “Crop growing in Ireland is changing” both SHINES AGRI & Samco are playing a big part in this change.